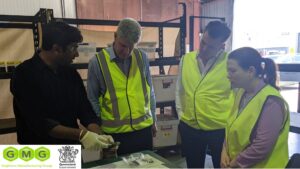 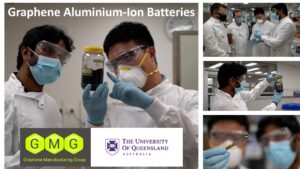 The Company will incorporate technology devised by AIBN Professor’s Michael Yu, Dr Xiaodan Huang and postdoctoral student Yueqi Kong that has made graphene into more efficient electrodes for powering batteries. The results are a battery with up to 70 times faster charging and more sustainability with a life up to three times greater than lithium-ion. UQ’s research team was awarded A$390,000 over three years to develop the graphene aluminium-ion technology from the Australian Research Council’s Linkage Project in 2020. Under the terms of the agreement, GMG and UQ have agreed to pay A$150,054 and A$82,788 respectively to carry out the project. GMG has also agreed to reimburse the incurred patent execution costs up to an agreed maximum amount.

AIBN Director Professor, Alan Rowan commented, “We are delighted to partner with GMG to translate scientific ideas into commercial solutions through the development of more efficient and greener batteries. After several years of dedicated research into improving the aluminium ion battery, we are excited to be at the phase of developing commercial prototypes for more sustainable, faster-charging batteries,” Professor Rowan said. Testing showed rechargeable graphene aluminium-ion batteries had a battery life of up to three times that of current leading lithium-ion batteries, and higher power density meant they charged up to 70 times faster. The batteries are rechargeable for a larger number of cycles without deteriorating performance and are easier to recycle, reducing potential for harmful metals to leak into the environment.”

UniQuest CEO, Dr. Dean Moss stated, “Aluminium-ion battery with graphene electrodes could transform the existing rechargeable battery market, dominated by lithium-ion. Lithium-ion batteries demand the extraction of rare earth materials using large amounts of water and are processed with chemicals that can potentially harm the environment. This project has real potential to provide the market with a more environmentally friendly and efficient alternative.”

GMG Head Scientist, Dr. Ashok Nanjundan commented, “The project could deliver far-reaching benefits for energy storage, while the batteries were also safer because they do not use lithium, which had been known to cause fires in some mobile phones. This project is a great example of academia and business working together. The current recyclability of batteries is highly problematic due to their chemical properties and the stockpiling of dead batteries presents a large and looming environmental and public safety concern.”

GMG CEO, Craig Nicol, “To use local raw materials to manufacture battery cells at a competitive cost to replace imported lithium-ion cells is a massive opportunity for GMG and Australia to reduce supply chain risks and create local jobs.   We’re excited about developing the commercial prototypes followed by initial production here in Australia – at a location yet to be determined.”

GMG is an Australian based clean-tech disruptive company listed on the TSXV (TSXV:GMG) that produces graphene and hydrogen by cracking methane (natural gas) instead of mining graphite. By use of the company’s proprietary process, GMG can produce high quality, low cost, scalable, ‘tuneable’ and no/low contaminant graphene – enabling demonstrated cost and environmental improvements in a number of world-scale planet-friendly/clean-tech applications. Using this low input cost source of graphene, the Company is developing value-added products that target the massive energy efficiency and energy storage markets.

The Company is also in the early stages of pursuing additional opportunities for GMG graphene including the development of next generation batteries, collaborating with world leading universities in Australia, and investigating the opportunity to enhance the performance of biodiesel and diesel fuels.

– Craig Nicol, Chief Executive Officer and Managing Director of the Company at craig.nicol@graphenemg.com, +61 415 445 223

“We’re excited about developing the commercial prototypes followed by initial production here in Australia – at a location yet to be determined” he said.

UQ’s research team was awarded $390,000 over three years to develop the graphene aluminium ion technology from the Australian Research Council’s Linkage Project in 2020.

Guy Outen, Chair of the Board and Craig Nicol, Managing Director, Chief Executive Officer and Founder, Graphene Manufacturing Group Ltd. (“GMG” or the “Company”) (TSXV: GMG), and their team joined Arne Gulstene, Head, Company Services, TMX Group, to celebrate the Company’s new listing on TSX Venture Exchange and close the market. GMG is a clean-tech, disruptive company that produces graphene and hydrogen by cracking methane instead of mined graphite. By use of the Company’s proprietary process, GMG can produce high quality, low cost, scalable, ‘tuneable’ and no/low contaminant graphene – enabling demonstrated cost and environmental improvements in a number of world-scale planet-friendly/clean-tech applications. Using this low input cost source of graphene, the Company is developing value-added products that target the massive energy efficiency and energy storage markets.

Cuspis is pleased to announce that GMG has filed and obtained today a receipt for a final non-offering prospectus with the securities regulatory authorities in the provinces of Alberta, British Columbia, Saskatchewan, and Ontario. The subscription receipts investment round closed over subscribed with over C$2M of funds.

Full details are available at

The Lastest Investment Overview for GMG by CEO, MD, Founder ~ Craig Nicol on GMG’s new website, all set for TSX-V listing in the near future.